How Love Won was an audience favorite at the Minneapolis St. Paul International Film Festival. It was received with standing ovations and won an audience choice award with the highest score of any documentary film.

City Pages picked it as one of “Four cool local movies at the Minneapolis St. Paul International Film Festival.”

Thanks to Blue Moon Productions for doing a wonderful job on producing the first trailer for How Love Won. Please share it with your friends.

Big news! The World Premiere of “How Love Won: The Fight for Marriage Equality in Minnesota” will be at the Minneapolis St. Paul International Film Festival in April. The film is entered in three categories: Documentary, Minnesota Made and LGBTQ Currents.

Exact date(s) and showtime(s) will be on March 17 which is also when Individual ticket sales for Film Society members start. Ticket sales to the general public start on March 24. Passes that give you access to all of the screenings of the hundreds of films at the festival are already on sale. Ticket sale link here.

Thank you to the hundreds of people who made this film possible! I look forward to seeing you at the festival. 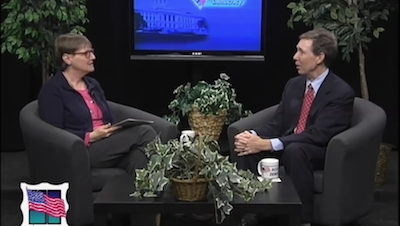 Could the lessons from How Love Won be applied to other contentious issues? Director Producer Michael McIntee talks about that with host Roxanne Meshar on Access To Democracy. END_OF_DOCUMENT_TOKEN_TO_BE_REPLACED 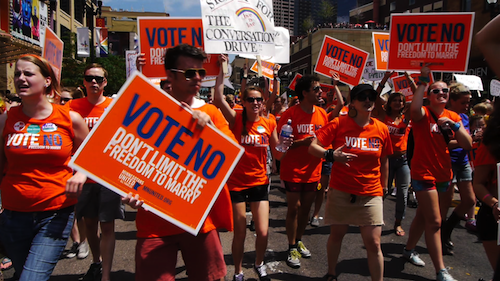 By Andy Birkey, The Column

Nov. 6, 2012 marked the first time a voters of a state turned back a constitutional ban on same-sex marriage. The campaign, the volunteers, the leaders, and the voters that helped Minnesota vote “no” are the subject of a new documentary called How Love Won: The Fight for Marriage Equality in Minnesota.

How Love Won takes a look inside the “Vote No” campaign led by Minnesotans United for All Families. It traces the research that led to a groundbreaking campaign that worked to change minds by connecting voters to the emotional aspects of the issue. Through interviews with campaign workers, LGBT leaders, social science experts, and same-sex couples, How Love Won paints the portrait of a powerful campaign at a unique time in history.

Public screenings for the film have not occurred yet, but on Sept. 17, donors that backed the film as well as those appearing in the film gathered for a private screening. To say the film was well received would be an understatement. The film’s director, Michael McIntee of The Uptake, received a standing ovation. The film moved many audience members to tears as it roused memories of the lows and highs of the campaign to vote ‘no.’ The Column attended the screening and interviewed McIntee about the making of the film, the historical significance of the campaign, and how the community can support getting the film into theaters.

Video of the interview

Note: How Love Won has not been released yet. It has been entered in several film festivals including the Minneapolis St. Paul International Film Festival in April 2016. The MSPIFF notifies film makers around February 26, 2016 if their film will be shown.

This story is reposted by permission from The Column. The Column is a community-supported non-profit news, arts, and media organization. We depend on community support to continue the work of solid LGBT-centric journalism. If you like this article, consider visiting Give MN to make a contribution today. 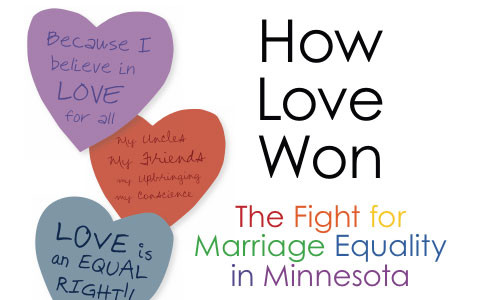 I was just blown away at the audience reaction to How Love Won: The Fight for Marriage Equality in Minnesota. We screened the documentary for about 150 of our Kickstarter backers and people laughed, cried and cheered (in all the right spots, too!) The film received a long standing ovation. I am so happy you like it!

If you missed the screening, here is the big news: we’re submitting it to the Minneapolis St. Paul International Film Festival, also known as MSPIFF (April 7-23) and the South By Southwest (SXSW) Film Conference in Austin, TX (March 11-19). We’re also submitting it to several other major film festivals.

Since this is a Minnesota-made film about a Minnesota story, I’ve been told it has a pretty good chance of being accepted to the MSPIFF. No guarantees, but a good chance.

It’s a different story at SXSW and other major film festivals. Thousands of films are submitted to these festivals every year and only a small number are accepted. However, I’ve been encouraged by other filmmakers who have seen How Love Won and assure me it has a chance to crack these festival lineups. If it did, that would give it higher visibility and a possible shot at wider theatrical distribution. That means more people would see the work you helped fund.

How You Can Help END_OF_DOCUMENT_TOKEN_TO_BE_REPLACED 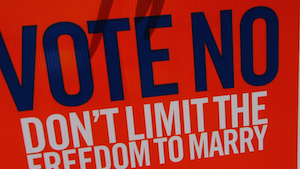 It’s been awhile since I’ve posted an update on the marriage equality movie that you and others helped fund. We’re just weeks away from reaching an important milestone — a rough cut of the entire film. It’s obviously taken longer than anticipated to get here, and I thank you for your patience. Once the rough cut is done, there will still be more work to do with adding music, animation and graphics. But we’re getting really close.

This is a community film project. Meaning you, as part of the community, are not only helping us fund it — but also help us make it. I have a couple of things you may be able to help us with in finishing this important film.

I have a section of the film that talks about lawn signs. People in the movie talk about how there were lots and lots of orange “vote no” lawn signs compared to the number of “vote yes” signs. I need photos (or video) of those lawn signs to help drive home the point that opposition to the “marriage amendment” was strong. If you have a photo or a video you made that shows one or more vote no (or vote yes) lawn signs and you’re willing to let me use it for the movie, please email me at michael.mcintee@theuptake.org

Also, I’m looking for additional video and photos of people celebrating on the days after the House and then the Senate passed the marriage equality law. Again, if you have photos or video you shot, please contact me.

I am so looking forward to you seeing the finished movie!

A lot of good stuff is happening for the Marriage Equality movie you helped fund.

I showed some video clips from our Marriage Equality movie to judges at the Minnesota Film and TV Board. They liked what they saw so much that they’re essentially doubling the money that you donated to make this movie. It’s part of the Minnesota Filmmakers Legacy Reimbursement fund — which comes from Minnesota’s Clean Water, Land and Legacy Amendment. Once the film is finished, they will reimburse me up to $24,000 for production costs. I believe in this movie so much that I’m willing to spend those dollars out of my own pocket and eventually get reimbursed by the state.

The judges who provided the award to us said, “there is a need for this story to be told”. I know you agree.

Earlier this month, I took some of the video clips you’ve seen posted here to Netroots Nation in Detroit; I was asked to speak about the project as part of the film series Reel Action To Real Action: A Showcase of Activism and Film. People liked what they saw — and just like you, want to see the finished film when it comes out.

I’m making progress toward finishing the film and will share more of what’s happening as we go through the edit and post-production process. They’ll be posted here and at www.MarriageEqualityMovie.com

Friday marks the one-year anniversary of marriage equality becoming legal in Minnesota! How has life changed for you or someone you know in that time? I’d like to hear about it. Please share it in the comments section below. 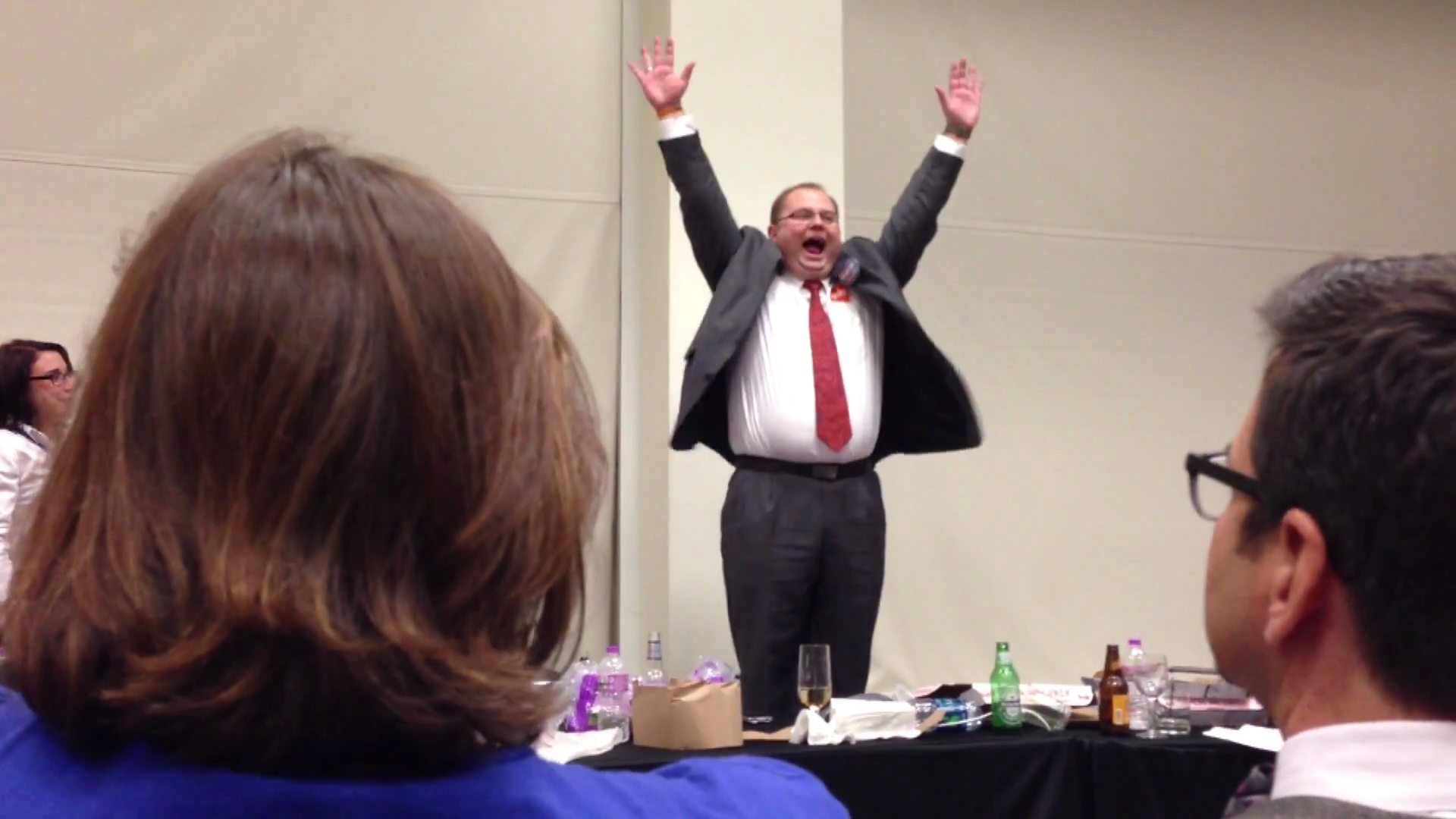 Remember that Marriage Equality documentary you helped fund last year? Thanks to you, we’ve been able to do many interviews with the people who led Minnesota to marriage equality. Their stories will move you. I’ve included just a small sample here so you can see how things are going.

It’s taken more time than we wanted, but the field production of our marriage equality documentary is finally underway. Thanks to the support of Blue Moon Productions and some wonderful volunteers, we are stretching those Kickstarter dollars you graciously gave us to make the best possible movie about how Minnesota went from no to yes on marriage equality.

We recently sat down with Richard Carlbom, who oversaw the Minnesota United For All Families campaign, to talk about his crucial role in the marriage equality battle. He told us about the day the marriage discrimination amendment passed in the legislature and his reaction to it. I’ve included the clip here because I think it sums up the tone of the campaign that ultimately led to marriage equality in Minnesota.