How Love Won: The Fight for Marriage Equality in Minnesota is now available globally on the Seed & Spark streaming service. The award-winning film, which traces the unlikely victories for same-sex marriage supporters in Minnesota, was produced by Michael McIntee and The UpTake.

How Love Won is an inside look at how LGBTQ activists in Minnesota won over people on a very divisive issue: gay marriage. How Love Won has become the playbook for how to actually talk about tough political issues. At the core of the movie are conversations people had about gay marriage — conversations that enable understanding and disarm hate. The film documents how Minnesota was a historic tipping point in the fight for marriage equality.

How Love Won has received standing ovations from audiences and high praise from critics.

“I’m incredibly excited for our film to be distributed on Seed & Spark,” said McIntee. “The film had sold-out performances during its limited run. This will give many more the opportunity to share in the joy of watching the arc of the universe bend toward justice and seeing love triumph.”

Seed & Spark is a streaming platform for filmmakers focusing on celebrating all identities and perspectives, making it possible for everyone’s story, no matter how specific or personal, to be seen as universal. The service has a “pay-what-you-can” price starting at $2 a month.

Seed & Spark subscribers can watch How Love Won at https://www.seedandspark.com/watch/how-love-won It is also available through Seed & Spark’s Roku and Apple TV apps.

This film was funded by donations from many people as well as with a grant from the Arts and Cultural Heritage Fund that was created with the vote of the people of Minnesota on November 4, 2008.

Judges at the Grand Rapids Film Festival have named “How Love Won” as the top film in the fest’s Transformative Film Feature category.

“We were so very impressed with your coverage of Marriage Equality in Minnesota, and the way you captured genuinely humanizing stories,” said GRFF President and CEO Jen Shaneberger.

“How Love Won” was one of eight films honored of the 104 films that were shown at the festival.

Since the election,How Love Won has been been getting new attention because it deals with how to talk about politically contentious issues in a way that brings about positive change. It has been selected to show at the Grand Rapids Film Festival on Saturday April 8 as part of its “transformative power of film” category. Only 11 other films were selected for this category.

Tickets to the 1:30 p.m. show at the Wealthy Street Theatre are on sale here.

Australia is wrestling with same-sex marriage. The country made it illegal in 2004, but since then pressure has been building to change the law with Australian Prime Minister, Malcolm Turnbull supporting the change.

So it’s timely that the Phoenix Film Festival in Melbourne made How Love Won: The Fight for Marriage Equality in Minnesota one of its selections for the 2017 festival that took place in February. We’re hoping that Australia can be inspired by what happened here in Minnesota to make positive social change so people can marry the person they love.

Our award-winning documentary How Love Won: The Fight for Marriage Equality in Minnesota has shown to packed houses and standing ovations in Minnesota. But very few people outside of the state have seen it.

That’s about to change.

I just got word today that How Love Won will show at the 2017 Oxford Film Festival in February. MovieMaker magazine says the festival in Oxford, Mississippi is one of the top 50 best in the nation for film makers.

Getting the film shown outside of Minnesota is a very important step to getting it wider distribution. It’s been a long process and it wouldn’t have happened without your support.

The details of exactly when the film will be shown are still being worked out. I’ll post them here when I get them. The festival says films will play on Friday and Saturday with winners repeating on Sunday. The awards ceremony is Saturday morning. Yes it’s a juried competition and How Love Won is in the LGBTQ category.

Here’s a cure for any election negativity you may be feeling. This Sunday come watch the feel good documentary about how an election changed things for the good in Minnesota.

The St. Cloud Film Festival has picked How Love Won: The Fight for Marriage Equality in Minnesota as one of its selections for this year’s festival!

Let your friends and neighbors know they can come see it 4pm Sunday Nov 6 at the Pioneer Place Theater in St. Cloud. It’s showing with two short films. You can buy tickets online for only $5.

See for yourself why it won an Audience Choice Award at the Minneapolis St. Paul International Film Festival.

Elections have consequences! Come, cheer and help us win another audience choice award.

In the Pride issue of Lavender Magazine, “Leather life” columnist Steve Lenius writes despite the “current political ugliness” Pride season gives him several reasons to be proud. And one of those reasons is the documentary How Love Won: The Fight for Marriage Equality in Minnesota.

“As I watched How Love Won, I felt proud all over again of the progress we have made in a relatively short time. I invite you to watch this film and see if you don’t laugh, cry, and feel a renewed sense of pride in our community, our neighbors, our allies, and our state. You want to see this movie.”

“How Love Won is a film of triumph, full tear-jerking moments of personal testimony and hands-in-the-air celebrations of communal jubilee.” —WCCO-TV Jonathan Sharp’s review explains why it is essential people see this movie now.

“One cause for celebration this year is a locally-made documentary playing as part of Pride week at the St. Anthony Main Theatre. How Love Won: The Fight For Marriage Equality In Minnesota powerfully highlights the historic defeat of the proposed marriage amendment in 2012 and the subsequent legalization of gay marriage soon after.”

Sharp interviews director Michael McIntee about the relevancy of the film in the wake of the Orlando shootings that targeted Latino LGBTQ people.

“‘The film shows how love can conquer hate,’ McIntee said. ‘Orlando shows us that still, despite what’s happened in the last decade or more, there’s still a lot of hate and it hides in a lot of places…But there a lot of folks in that in between category that can be reasoned with and can be talked to. I think it’s just that much more important to reach out to them, and, within their own value systems, work to change how they think about people, how they deal with people.’” 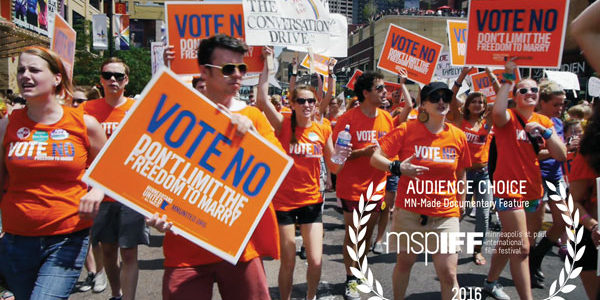 By popular demand, How Love Won: The Fight for Marriage Equality in Minnesota will show three times daily during the upcoming Twin Cities Pride Festival at the St. Anthony Main Theater.

This is the documentary that won the Audience Choice Award for Best Minnesota-Made Feature Documentary at the Minneapolis St. Paul International Film Festival. If you’re one of the hundreds of people who voted for it, please tell your friends they should see it, too!

Fear not: many of those tears are happy tears!

Still not sure? Watch the trailer.

How Love Won was an audience favorite at the Minneapolis St. Paul International Film Festival. It was received with standing ovations and won an audience choice award with the highest score of any documentary film.

City Pages picked it as one of “Four cool local movies at the Minneapolis St. Paul International Film Festival.”